His vision, his world, a shambles
Soul matter blasted into splinters
His prayers for freedoms and joys splayed
Across the Universe
The result of his grasping in silt for light

He blamed her, she who berated him
For his throwing her under the bus
He forgot she was the one who hears when he refuses to listen
He set about to break her, then eradicate her
He didn’t notice she’d already been shocked into a heap of sobbing incertitude

He accused her friends, the ones who stepped in
The ones who told him he was over the line
But they only needed to have their say
And then they moved on
Anything else was of minimal intrigue

Incredible how he missed the obvious; how he didn’t recognize their handiwork
Smoke swirling around their heads, cigars on their lips
As they sat at the liquor laden table surveilling
His own nearest & dearest slogging to tell him, show him, lead him
And he’d left them laughing, cursing and then sighing 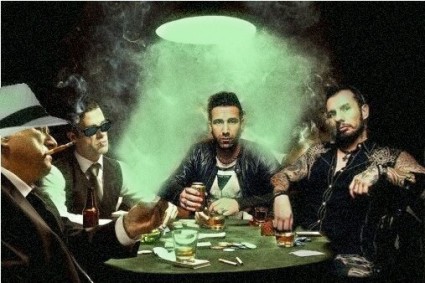 It was time, he was overdue
The escapes of old were disingenuous now and the diversions too unworthy
The old schtick overworked, overused, overdone
His purpose was grown now, and he needed to catch up
Seemed to be taking him forever to catch on

It grates on them, the way he pisses and moans
When his prayers are answered
As if his puny ideas and plans matched the Universal facilities
They roll their eyes at his indignant umbrage and dismissal of Universal intent
At his constant returns, to deferral, to keep playing in skin deep

Time to stop blowing smoke, they tell him
It is so bloody well up to you now, this part, bud
Bemoan it, ignore it, delay it, but it don’t matter
It’s only fear in the way and fear’s no match for the inevitable
Your prayers, pal – so, get your own arse outta the way

Hey, Tony… your turn to deal…

They said to her,
“Hard work being convinced the latest & the latest latest is the real thing this time, hey”?
“Haaaa…as their laughed soared & faded, “Sure… sure it is, ha ha haaa”…
…and she only smiled back at them. After all, they know everything…