I attended a rally yesterday to protest the continuing efforts to raze the land within the Peace River district of British Columbia and Alberta also known as Treaty 8 territory.  The protests are not about ‘hindering progresses’, they are about speaking against an incredible sense of depravity within the desire to forever ruin the lives of people and all the history of their ancestors for the simple purpose of serving big money. It is unconscionable and especially so because it is unnecessary.

The publicized intention is to flood that area’s prime agricultural and hunting/gathering grounds for the purpose of generating much-needed electricity.  In a word, that’s bunk. Typical BC Liberal & big business bunk. 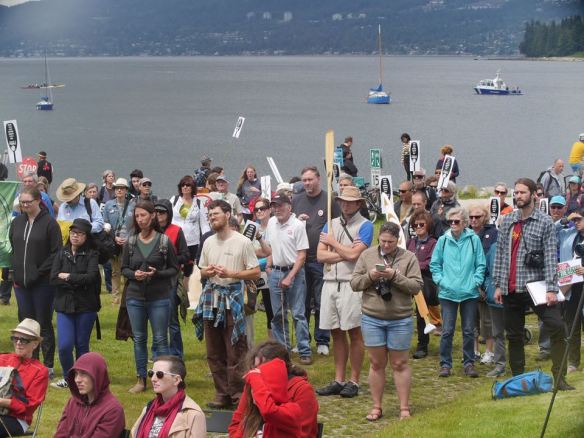 The basis is greed… spending billions of dollars to build a dam that will serve international need in industries that many people are coming to realize are relics of progress past and are in the midst of being turned away from for the betterment of the entire planet – the purpose is mostly for moving bitumen and tar products overseas.

Story after story has been published about the facts and figures of these points and still the BC Liberal government (a misnomer if there ever was one because this political party is as conservative as the former ruling party of Canada, the Progressive Conservatives) bulldozes on.  Links to a few of these stories are noted below.

I speak to the human side of this issue, about the real people who live there and who are somehow meant to be mere side effects of big business allegedly on behalf of the majority of the population which lives in BC’s lower mainland.

BC Hydro says 73-77% of BC residents support this project. I find it extremely hard to believe that many BC residents support this when most Vancouver residents already understand it is not the clean energy being touted:  “The Site C dam is being built with taxpayer dollars to generate energy for expansion of fracking and the tar sands, contributing to life threatening climate change and destroying precious farmland and artifacts,”  said Audrey Siegl, Musqueam Band member and community organizer, in a release.

Treaty 8 is my ancestral homelands.  In fact, my great-grandfather was a signor on that 1899 Treaty.  Do I think that he and all Indigenous signors believed they’d be signing away their homelands, the very source of life sustenance for their children and children’s children in any manner and for any reason close to what has been happening ever since?  I will ask you instead.  What do you think?

In only one of many examples of what this project for China et al is all about: when a government is paying out $55 million per year to turn off even one working electricity generator that means we have no power supply shortages now or for the immediate forseeable future. In fact, electrical consumption has been going down.  This is a make-work project for some people at the expense of generations of others.  It’s a get-rich project for even fewer.

I do not believe, I simply cannot believe, that the majority of BC and even Alberta residents think they are more important than the grandmothers, grandfathers, their children and their children’s children in northern communities. I think if it were about the devastation of their families and stunning landscape, they’d be vocal and taking action to stop this insanity too.

So, that’s what I’m asking for… that’s what I hope for – that people will help people in their own back yards not have to suffer and succumb to the utter havoc being wreaked against an area and the people who live there for no damned good reason.

Sign the petitions of the noted organizations working on behalf of this critical issue. Send your own letters to the provincial and federal governments. Sign the online works and forward the pages on. It’s that simple.  Surely to God, people can do that much to help their fellow neighbours…because eventually this greedy madness will affect everyone when the bills for it come due.  Remember when so many doubted the effects of climate change? Well this is part of the reason for it.

Please, for the love of God’s green earth – do something.

Organizations you can look up to read about the issues or sign a petition:

BC HYDRO SEEKS AN INJUNCTION FOR SITE C

5 thoughts on “When Bunk Is Passed As Progress For All, We All Fail, Site C Dam Failures”