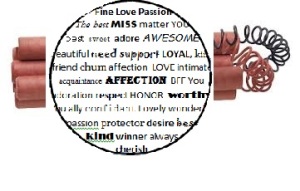 You matter, until what?

How is it that the very people who labor to use the power of words to sear their literary brilliance into the soul of another, often quite successfully, easily turn around in utter ignorance that their works of off-handed effort can also be taken to heart by anyone?

I love you; I miss you; I care about you; I’m listening; you are so special to me; I’d do anything for you; you matter.

I see these words used regularly, ‘normally’, by many in the world of blogs, story comments, Facebook notes, Twitter love,  in reply to their readers – certainly not all writers, but enough to see the consequences often enough.

I see how these words and phrases are used and it has come to drive me up the literary wall of frustration – and beyond the heart-break indignation sometimes expressed. It’s especially galling where the users are writers by profession or regularity in pastime. They should know about ‘the power of words’ better than anyone. They should be the ones defending the power of language.

Those who explain away those usages as just throw-away lines in the heat of their emotions or from the pinnacle of whatever uncontrolled enthusiasm have somehow managed to become some of the most clueless centers of their earth(ly selves).

Those sort of throw-away lines are not harmless whether they are tossed around in obliviousness or deliberately lobbed. To the uninitiated, they are bombs of hope or heartache. Some might say it’s one’s own choice in how to react, but I wonder…. who gets to decide that they get to be the testers of merit?

Readers are not just recipients of thoughts, they are real people who believe in words, who respect words, and yes, mostly they realize the power of words. They know words matter.

Our words are not just for titillation, or for creating magnetism to draw appreciation, adoration and viewing hits. The power of words is always about touching views, inner sight, hearts, and souls.

The irresponsible use them to assuage their ego-based itches and cuts. This level of self-service is fucking mind boggling (pardon my French, it’s Canadian, eh). (Sorry, France).

I have to ask, where is the honest to God respect for the power of words? Unless being a charlatan is the norm, since when should anyone, that you really don’t know, take for granted that words such as ‘I love you’ or ‘you matter’ or even ‘fuck off’ are a throw-away line of the most minimal meaning possible

Where’s the awareness of why one is doing whatever it is one is doing? It doesn’t take a great deal of effort to sit for a minute to ask, why am I going to do this or why does this matter?

Say what you mean and mean what you say – learned by many and usually the hard way, but oh, so worth the earn.

I know I reflected when I finished this post. My answer was, I do not understand why there is such emptiness coming from people who work so hard to carve out some attention to their views, and damn it all, I really enjoy a good rant now and then too.