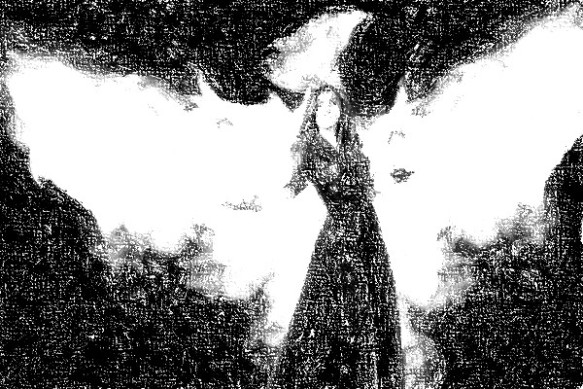 One was too saintly, the other mystifyingly, overly wanton
but, the muse that had once stood in front of him,
caused him the great distress of having to choose between them.
He couldn’t have loathed her more for that.
She was the appointed trajectory change, The Annointed,
ready to absorb all pain,
swallowing every shot of poison he threw on her.
His game changer.
She’d fulfilled her divine role, took it all, and then she cried & cursed, screamed & writhed until her strength of purpose coiled it all up and she hurled it to the Universe-
trusting its claim to render the collection into harmless stardust.
And then she burned him….
She left him
She left…
The deepest of profane-worthy infractions: the disease of desertion, the unholy crime of abandonment. That’s why he set his world on fire…
She left.
Him.
If he’d really wanted the Saint, he’d have got ordained and lived on his knees. He’d have played at prayerful loving until he could run for privacy to vomit out the inevitable gut-full of banal-blended depression.
If he’d really wanted Devil Baby, he’d have dug into the part of ratbag with a heart of gold for much longer than 190 days of tortuous – love to love & hate you, Baby Girl.
He hungers for the one who wasn’t a saint, but had an army of them for back-up…. that one just near enough to demons to be inspired without getting sucked into their seediness.
He’d forgot the bargain to hold muses indefinitely; ignored it entirely.
Unsuitable for the narrative of his design, and yet…
He poured gasoline all over his world to regain that searing desire and relief that only she’d ever drawn from him.
He imagined himself a Phoenix, but he’ll never leave the flames. He will never know the cooling of the ashes as they heal and repair. He will never rise anew.
He burns… forever,
but not nearly so much as for
more of her.

6 thoughts on “The Phoenix Seeks”