I’m not an authority on all things Indigenous.  I am only an authority on being one. Despite my great-grandfather, being an Indian signatory on Treaty 8, most of the information regarding our history with government oversight is new to me, as I expect it will be to most of you.  What a shame this statement is. 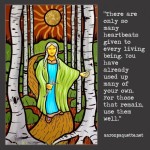 If you’ve ever read general media stories on Indigenous issues, coupled with what you likely learned in school, it wouldn’t be surprising if you have very light, usually unfavorable understanding, of First Nations peoples. Too often we’ve been portrayed as drains on society’s purse and guilt strings.

The headlines, commentaries, and letters to Editors that I see daily certainly provide ample evidence of that.  We’re at a place now where we can rise to counter the myths and we should.

My son has been in our local school district’s Aboriginal Program since 1st grade and though his lessons have included more cultural detail and none of the talk about Indians terrorizing settlers that I’d learned, there’s wasn’t much beyond that except one disturbing lesson.

It was only 3 yrs ago, within the general curriculum, that he was taught that Indigenous children forced into the infamous residential schools was a good thing because they were able to get an education. For the record, those notorious schools are not ancient history; the last of them closed in 1996.

Apparently, those school lessons remain much the same for the general curriculum and Aboriginal program until graduation.  There are no details added such as why the original Indian/Aboriginal/First Nations reserve system was created, what the rules were for living on them, and how they’re funded.

This is mainly what’s behind the long-held misconceptions about what and why things are the way they are. I don’t think this is by mistake.  I think we were all misled by early and some current governmental efforts to hide, subvert, and muddy the details of Indigenous history and issues in Canada.  I think there was disinterest by most media who, given generous benefit of the doubt, were likely unaware of the full picture too.

As more demands for governing transparency are made and more communications technology becomes available, we’re all learning far more, which benefits the Indigenous greatly by finally being heard in more vast and accessible ways.  Government records are being posted online for all to review, including the many Indigenous peoples catching up in education.

As mentioned in my previous post, some of my recent discussions about First Nations were rife with that lack of education and full of bitter assertions, derision and accusations against First Nations. When I contradicted their understandings, barrels of outrage erupted.  The chats quickly devolved into calling me names and mentally unfit.

The highlights of the madness that ensued are these:

We give you our taxes!

The majority of First Nations people do, in fact, pay all taxes. Of the 1,400,700 Indigenous as of 2011, which includes registered and non-registered First Nations, Metis, Treaty, and Inuit, all are required to pay income tax and the same goods and services taxes as everyone else.

Most of these people (+70%) do not live on reserves. The fewer numbers who live on reserves, and who can now earn income on reserve land, do get some income and goods and service tax exemptions, but not near the often assumed levels of ‘privilege’.

As for those other often touted ‘free funds for Natives’, I’m a card carrying legitimately recognized Metis and I have yet to find any funding to meet my medical needs or for continuing education outside of the same channels for everyone else.

There are 3,000+ elected First Nations officials in Canada.  They’re required to turn in over 160 to 200, financial reports per year to the department of Aboriginal Affairs and Northern Development Canada (AANDC, known as CIRNA effective 2018). Chiefs who misappropriate funds exist but number less than the annual mismanagement cases we find in the Senate. How are any bands able to consistently outwit the 4,000+ employee AANDC, when it is literally their job to read & approve the reports they demand of these bands?

Assembly of First Nations Interim Chief, Ghislain Picard made a good point when he said, it’s too bad it’s these exceptions that are trumpeted and viewed as the norm instead of no outrage for the many more Chiefs who are grossly underpaid.

Despite the heavy demands of the role, the average band Chief makes an average annual salary of $60,000 (updated in 2015 from a previous average of 36,000). Many are making far less than that, as low as $0.00 to $25,000 annually. They get no pensions nor entitlements as those provided for Prime Ministers, MPs, or Senators.

First Nations don’t live off of taxpayers, in fact, quite the opposite, their resources have generously subsidized Canada.

The common misunderstandings of facts

Although, the 1876 Indian Act was used to brutally coerce government control of Indian economic and resource development and land use, Canada was formed through legal negotiations rather than war.

Treaties were agreements meant to sustain Indigenous rights and uses of land and resources equally with European newcomers. They are not invalid ancient history documents; there have been several additions since, right up to the current Harper Government.

The Indian Act outlawed First Nations from acting for their own economic development. This has only recently been somewhat revised and many reserves now generate their own monies in addition to the transfer funds they get from the ‘Indian Trust Fund’ which is overseen by Aboriginal Affairs and Northern Development Canada, (AANDC). They’re often referred to as ‘federal funds’, but that term should really be, ‘federally managed Indigenous funds’.

Must deny facts to retain right to argue

The monies that were/are supplied to this trust fund came from part of the resources taken off of their lands. Note to people who insist it was started with taxes: the Bank of Canada and the taxation system didn’t even exist at that time.

This fund is substantial, billions of dollars, and the Government of Canada still decides how those funds will be distributed to the bands.

The country of Canada, when unable to manage with the rest of the resources from land and taxes, has actually lived off of that First Nations trust fund from time to time, paying for things like general Canadian infrastructure and economic stimulus plans.

This is only part of a rather large story, but writer, Elyse Bruce who regularly covers Indigenous affairs further speaks to the points.  If you follow her link, you will also get a picture as to why there is chronic under-funding to First Nation’s people who were made to live on reserves and into the Arctic regions to maintain Canadian territory:

…”the monies due the First Nations peoples from natural resources has been taken into consideration as part of First Nation revenues”.

She’s referring to the fees for the licenses, permits and other instruments to individuals and organizations for exploration and development on First Nations land, and the Indian Moneys Suspense Accounts under the direction of the AANDC.

…”If the resource exploration and development projects weren’t on First Nations property, there wouldn’t be any need for AANDC to involve itself ergo the revenues generated from “licenses, permits and other instruments to individuals and organizations” is First Nations revenues, is it not”?

“In other words, there’s all kinds of money that belongs to First Nations peoples that isn’t part of the First Nations Trust Fund, (and yet) the AANDC controls all of it”.

So where have all those extra funds been going?   Could it be, that Canada is in debt to the First Nations Trust Fund? First Nations have been asking for transparency of that account for years.

They’ve also been asking for autonomy in administration of their funds, education, and social services; however this has not been a successful effort.  This was very nearly accomplished with an agreement set to be signed in 2007, called the Kelowna Accord.  It was cancelled by the then next incoming Prime Minister, Stephen Harper.

One more note that begs sharing, in my opinion:

Most, if not all of this, should be common knowledge to the average Canadian citizen, after all it’s their history too. Given the speed with which we can share information now, I feel cautious optimism that most Canadians will finally understand the issues and the reasons behind them.

These details are a huge missing piece of esteem building block for people of Indigenous ancestry. We don’t all have a full understanding of our own history. We deserve this. We deserve recognition for the stunning contributions of the Indigenous Peoples on behalf of Canada even while being purposely oppressed or denigrated for the consequences of that history.  Surely, this is worthy of respect; it’s certainly worthy of placement in all school history books.

Unfortunately, there will always be people who will continue to deny the worst of our history despite its evidence. There are citizens, leaders, and purveyors of history who say it’s time to just to move on. How do they propose successfully moving from point A to C, if we don’t acknowledge the hows and whys of point B?

Knowledge changes everything. All of Canada benefits when her history is fully known. The scars of that history can heal only if they’re truly and fully acknowledged; the fears that hold that back, hold us all back.  Those fears are based in the idea of losing something, but the facts show that there is only everything to gain.

How much does Canada owe Indigenous communities for stolen land?

My boy – I will always hope that whatever your challenges are to be, you will always know that you are lovingly surrounded and supported by a thousand of your ancestors.  You are a great spirit, with the wisdom of the eagle and the heart of a warrior.